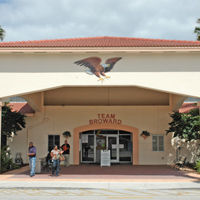 The Broward Transitional Center (“BTC”) is a detention facility that houses – among other individuals – immigration detainees that the Department of Homeland Security’s Immigration and Customs Enforcement (ICE) is in the process of attempting to deport. Some of the individuals detained have final orders of deportation, whereas others may have pending Immigration Court proceedings. BTC is currently managed by a private company, the GEO Group. There is an Immigration Court located within the facility, where removal proceedings are held. Immigration detainees at the facility may be eligible for a bond or order of supervision, depending on the circumstances of their case.

The facility’s address is: Broward Transitional Center, 3900 North Powerline Road, Pompano Beach, FL 33073. Tel. (954) 973-4485. ICE’s main telephone number within the facility is (954) 236-4900. The ICE Supervisory Deportation Officer in charge of the facility can be reached at (954) 545-6060. Detainees cannot receive incoming calls, however, ICE states that a person may leave an “urgent message” for a detainee by calling (954) 973-4485, making sure to “leave the detainee’s full name, alien registration number and your name and telephone number where you can be reached.” A short guide by ICE about the facility and its policies is located at http://www.ice.gov/doclib/dro/facilities/pdf/wccpbfl.pdf. Some of the information, may be dated. For example, immigration bonds may now be additionally posted at the Miramar “ERO,” located at 2805 SW 145th Ave., Miramar, FL 33037 (tel. 954 – 843-5800).

I strongly  recommend that you call the facility first before attempting to visit, to make sure that you know the current visitation rules, and that the person detained will be available for a visit.   There are frequent “head counts,” and other routines in the facility which could interfere with your visit.

If you receive a call from a friend or family member who is in immigration custody, it is a very good idea to ask them the following questions, in order to be able to locate them “in the system”:

Where are you (name and address of the facility)?

What is the exact spelling of the name that you are detained under?

What is your date of birth?

What country does ICE have you listed as a native of?

Have you been issued a bond?

Do you have an upcoming Immigration Court hearing?

When talking on the phone to a detainee at the facility, be aware that the calls are monitored.

Immigration detainees who over the age of 18 might be located using the ICE “Online Detainee Locator System,” located at https://locator.ice.gov/odls/searchByName.do.
If you have a friend or family member in immigration custody, it is generally critical that they obtain legal representation as soon as possible. Unlike a defendant in criminal proceedings, there is no equivalent of a “public defender” for people in deportation or removal proceedings. Immigration Court hearings for those in immigration custody occur very swiftly, and the respondents in these proceedings are often not given very much time to secure an attorney. As a result, many end up representing themselves, usually with catastrophic results. Others may already have orders of deportation or removal (sometimes entered in absentia, that they were not even aware of). In some cases, it is possible to motion the Immigration Court or Board of Immigration Appeals to reopen the deportation or removal proceedings, and eliminate the order of deportation before the Deportation Officer accomplishes a detainee’s deportation.

I have been successful in securing the release of many individuals who were detained in Immigration custody, and obtaining durable Immigration relief for many clients through litigation in Immigration Court.  If you have a friend or family member detained at BTC, Krome, or other immigration detention facility, call me at my law office, Mitchell J. Cohen, P.A., 1250 E Hallandale Beach Blvd., Ste. 500, Hallandale Beach, Florida 33009. Tel. (954) 457-1941.   Fort Myers Law Office: 8660 College Parkway, Suite 250, Fort Myers, Florida 33919.     Tel. (239) 931-6558.   www.greencardcohen.com.
Would You Like to Know More?