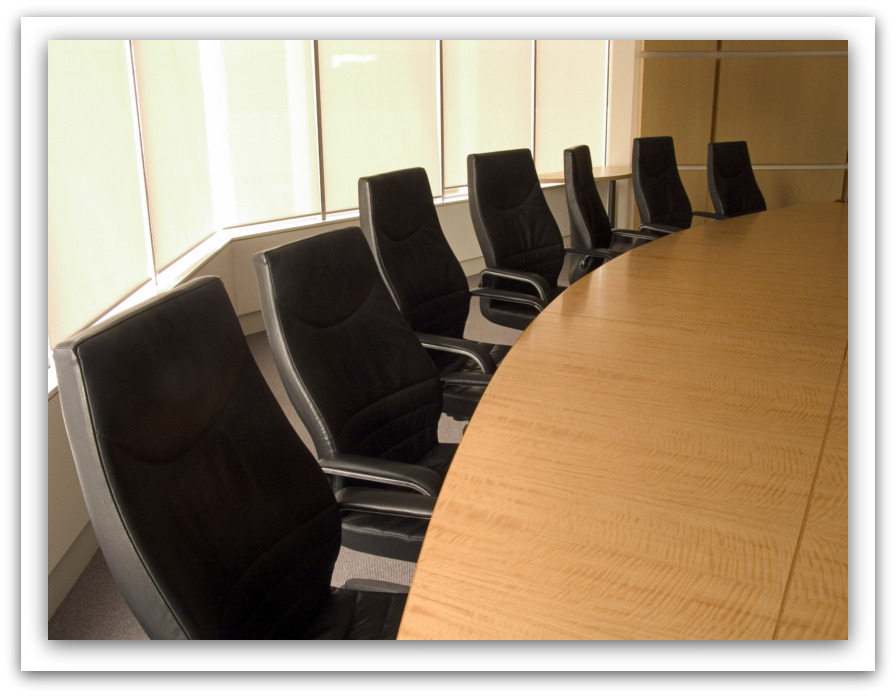 A very wise individual once said, “If you fail to prepare, you are preparing to fail.” This expression especially rings true when it comes to your interview with your local United States Citizenship and Immigration Services (USCIS) office. Yet every day, people will go to their immigration interviews unprepared, and the consequences can be horrific. Their cases may be denied, and some applicants may even be arrested by immigration at the time of the interview, and even deported back to their country of origin. How does one avoid becoming one of these unhappy statistics? How can you increase your chance of winning your immigration case? In this article, I will share some valuable information, which I hope you will find instructive.

1. Arrive on time.
Immigration officers expect you to be on time for your immigration interview. If you are late, the officer may deny your application. Be prepared to encounter long lines at the entrance of the immigration building, and therefore it is advisable to arrive at least 30 minutes before your scheduled interview.

Also it is important to know that you will not be allowed to bring certain items into the immigration building, such as: matches, lighters, any liquids (including perfume), sharp objects, and pepper spray. If an guard stops you because you are in possession of any of these items, you will usually be given the choice of either throwing the item away or taking it back to your car, which may make you late for your interview, because you may be sent to the back of the line. Be aware that some immigration field offices do not permit cell phones.

2. Wait for your Attorney.
Occasionally an immigration officer will call you for your interview earlier than your appointed time, before your attorney has arrived in the waiting room. In these cases the immigration officer may pressure you to go ahead with the interview without your lawyer present. He may ask you to sign a form agreeing to be interviewed without the presence or assistance of your attorney.
It is a huge mistake to agree to be interviewed without your lawyer present. In this situation the intelligent thing to do is to respectfully ask the officer to allow sufficient time for your lawyer to be present at your interview. Without an experienced immigration attorney present to protect you, the immigration officer may trample all over your legal rights, and deny your case.

3. Dress appropriately.
Immigration officers, like most people, tend to judge people on their manner of appearance and dress. The immigration interview is a serious, official and formal situation, and I strongly recommend that you dress conservatively for the interview. It may increase your chances for success. Translation: no shorts or flip flops.

4. Listen to the Questions Asked and Respond Appropriately.
Practically nothing aggravates and disconcerts an immigration officer more than an applicant who does not directly answer the question asked.  In my years of experience, this is perhaps the number one cause of immigration interviews going sour. The immigration officer will ask specific questions and he expects specific, direct and logical answers. For instance, if an immigration officer asks the applicant “When did you last arrive in the United States?” The response should NOT be, “I entered on a tourist visa.” Instead of telling the official the date of his last entrance to the United States, the applicant told the officer the type of visa he used. This is the type of non-answer that is sure to get on an officer’s nerves. Another example: Question – “When did you first meet your wife?” Answer – “I met her at my friend’s house.” This is not responsive to the question. If one persists in providing these types of non sequitur answers, the officer will generally get so annoyed that he will determine that you are being evasive (lying), and will he deny the case. There are a multitude of types of questions that may be asked of you at the immigration interview. It is of paramount importance that you listen carefully to these questions, and that you be prepared for the questions so that you can respond effectively.

Example 1: The husband is asked what he gave his wife for her last birthday. In fact, he did not get her anything for that birthday, however he was too embarrassed to admit that. So he tells the officer that he gave her a bottle of perfume. When the officer asked the wife what her husband had given her for her last birthday, she said that he had not gotten her anything.  Because of the differences in the responses, the officer doubts that the marriage is real.

A good immigration attorney will prepare you for the questions you will be asked at the interview, and help protect your rights in the process.

7. More is better than less.
A very common mistake in marriage residency cases is when the husband and wife wait until they get the immigration interview notice before they start collecting documents and photos to prove that have a bona fide real marriage and live together. It may take several months to more than a year from the time an application is filed to the time of the final residency interview. Do not wait until the last minute to start collecting proof of the bona fides of your marriage. Some couples wait until the last minute to open a joint bank account, and as a consequence, at the interview they can only produce one or two bank statements in both their names. Or they wait until the 11th hour to enter into a lease, even though they have been living at that address for a long time. When the lease they present at the interview is only dated a few days before the interview, the immigration officer may be suspicious of the marriage and lower the chance of the application’s success. Another mistake is for the for either spouse to wait until its too late before applying to have a driver’s license changed to reflect the address where they are currently living. If the addresses on the driver’s licenses do not both accurately reflect the marital address, the immigration officer will likely doubt that the marriage is real.

Another big mistake is when the tax return does not properly identify the couple’s marital status. Instead of going to a certified public accountant (CPA), they go to an unprofessional tax preparer, and in many instances the tax returns will fail to correctly identify the marital status. If an immigration officer sees that you were married in 2008 but your taxes for 2009 and 2010 list you as single, the officer may well use that fact to question the bona fides of your marriage.

One of the worst missteps a marriage-based residency applicant can make is coming to the interview with little or no proof that the couple resides together. This failure to provide a sufficient quantity of documentation could doom the case. That is why when it comes to documenting your marriage, more is far better than less.

For example, let’s talk about photos. If a married couple is really living together in a normal, healthy, loving relationship, they should be able to produce photos of a wide array of situations and over a period of time. The photographs should not only be of the both of them together, but should reflect their wider world of friends, family and acquaintances. Wedding pictures are great, and in fact photo albums of the wedding are very persuasive. I have represented clients who have come into the interview with boxes full of photos and other evidence in support of the bona fides of their marriage, and their interviews proceeded very smoothly. On the other hand, the couple that brings in a paltry amount of evidence is likely to experience a difficult interview where each one is interrogated separately by a quizzical and doubting immigration officer, and their case is much more likely to be denied.

My friends, make no mistake, today in the United States obtaining legal residency is truly a battle, but with the right preparation you can win the battle for the green card.

This article does not constitute legal advice and does not substitute for the advice of an immigration lawyer familiar with the facts of your individual case. 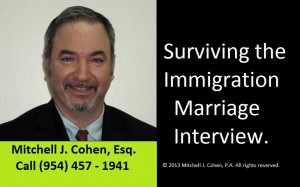 Attorney Cohen has been in practice since 1999, and has law offices in Hallandale Beach (Broward County) and Fort Myers (Lee County), Florida.  Attorney Cohen represents clients in the greater Miami, Fort Lauderdale, Fort Myers area, and throughout Florida.

If you have a question, please call Attorney Mitchell J. Cohen for a consultation. Immigration Law Offices in Hallandale Beach (954 457-1941) and Fort Myers, Florida (239 931-6558).   Member of the American Immigration Lawyers Association.